While some doubt the value of the phrase “Black Lives Matter,” time and time again we are reminded that black bodies are not respected by far too many Americans. Race matters, not because we discuss it, but because racism exists whether we opt to talk it or not. While some of us can exist in our lives without being experiencing racism, it is only when we broaden our worldview we understand the disparate experience of far too many black bodies.

“He who passively accepts evil is as much involved in it as he who helps to perpetrate it. He who accepts evil without protesting against it is really cooperating with it.” Rev. Martin Luther King, Jr.

“We live in a world where a lot of white people will shrug off those stories as isolated incidents, rather than products of a culture that unfairly, unrelentingly conflates blackness with criminality.

We live in a world where a white woman answers her door to a black teen and doesn’t even hear his words. She sees his skin color, and she screams. Her husband decides he must be shot.

We live in a world where black men waiting at Starbucks — something I’ve done in my white skin more times than I can count — are assumed by management to be up to something.

We live in a world where a lot of white people need to be reminded that black lives matter — and yet they receive that reminder as an insult. A provocation. A punch line. 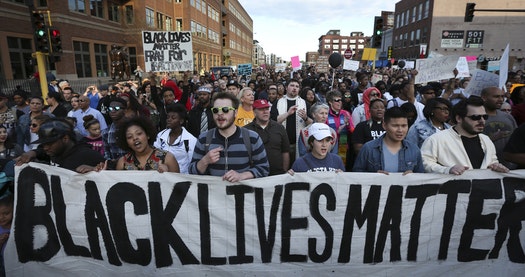 10 thoughts on “Black Lives Matter is a Mantra, Not a Punch Line”